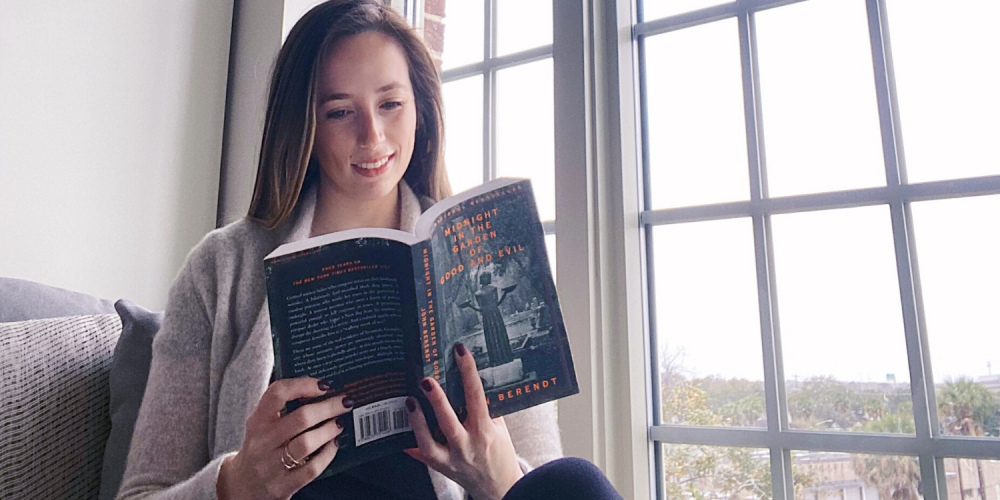 I’ve been looking forward to my March reading list ever since I started planning what I wanted to read in 2020. I’ve been excited to dive into a bunch of books about powerful women in honor of Women’s History Month.

But obviously I didn’t anticipate our current lockdown situation when I made my reading plan. Even though I’m at home with extra free time, I’m finding it hard to concentrate on reading right now. I’m using my brain power and attention in different ways.

Anyway, I still managed to read several fantastic books to celebrate Women’s History Month. And I fit in a re-read of Midnight in the Garden of Good and Evil during a trip to Savannah. I went for one night at the beginning of month to see some friends, not knowing at the time it would be my last trip for a very long time.

The Boy is Back by Meg Cabot

I really liked Meg Cabot’s The Boy Series when it was released a number of years ago. I’ve also never met an epistolary novel I don’t like. So naturally when I found out that Cabot had released a fourth book in the series, The Boy is Back, I couldn’t wait to check it out.

I don’t know if the series wasn’t that good to begin with and I just had underdeveloped taste back then, or if Cabot dropped the ball with The Boy is Back, but this was just …. eh. Characters I didn’t care about, a storytelling device that seemed really dated (friends and family communicate via FaceTime, DM, and group text these day, not so much with emails and chat rooms), and a lackluster plot.

And yet there’s just something I love about Meg Cabot, so I still didn’t hate it. What can I say – maybe it’s nostalgia!

The Antidote for Everything by Kimmery Martin

I liked Martin’s The Queen of Hearts and have been anticipating The Antidote for Everything since she announced it’s publication. Man, I was so disappointed when I finally read it!

Martin writes books that are like very dramatic story arcs on Grey’s Anatomy. But this story had no emotional resonance for me. I’m writing this review less than two weeks after reading it and already I’ve forgotten what the book was about.

I liked the first third of the book alright but even that was like a song being sung just a little off beat. It was close, but no cigar. The story began to pick up speed a little in the middle, although the attempt to shoehorn in a romantic side plot just didn’t work for me. And by the end the whole thing felt convoluted and confusing. On top of that I just didn’t care about any of it!

If you really enjoyed The Queen of Hearts then you’ll probably read this no matter what I say, but I really wish you’d save your time and skip it.

The Girl with the Louding Voice by Abi Daré

The Girl with the Louding Voice was another one of my book club’s picks that I was initially apprehensive about. The book is about Adunni, a fourteen-year-old girl in Nigeria who is sold into marriage and slavery. It just seemed too depressing a read in the middle of the coronavirus.

I wasn’t initially drawn into the story. The dialect made it hard for me to get into things. And since it’s written from the perspective of such a young girl, it also felt a little juvenile at times.

But Adunni has an indomitable spirit that makes you root for her to succeed and you’ll want to keep reading to find out how her story ends. Eventually I got into the book and finished it in just one day. (I may or may not have procrastinated and finished it just moments before our Zoom book club began …) I think this book is a great pick for readers who want to get out of their literary comfort zones.

Midnight in the Garden of Good and Evil by John Berendt

If you’re from Georgia or planning a trip to Savannah, Midnight in the Garden of Good and Evil is a must read. It’s also a great example of a piece of non-fiction that reads like fiction.

Midnight in the Garden of Good and Evil tells the story of a murder in the 1980s in one of Savannah’s finest homes, and the subsequent legal proceedings. But it’s also the story of the many colorful Savannah residents that the author John Berendt encounters during his years living in Savannah.

I don’t think there exists a book more entrancing and quintessentially Southern than this.

Catch and Kill by Ronan Farrow

Buckle up for a long review, because I’ve got a LOT to say about Catch and Kill. I wish I’d read it for a book club because I have so much to say about it. This is a book I just want to shout about from the rooftops and encourage everyone to read.

I read Catch and Kill and She Said back-to-back so it’s hard not to compare the two books. For a reader who is looking for a story that seems too crazy to be true, you’ll prefer Catch and Kill. Farrow worked on his Weinstein exposé for longer than other reporters did, and so had to deal with more scrutiny from Weinstein as a result.

Farrow’s account of his reporting process focuses a lot on the crazy tactics Weinstein used to try and stop the work of Farrow and his sources. That drama, plus the drama of Farrow’s struggles to get NBC to air his story (it was originally filmed for NBC but when NBC leadership refused to let Farrow keep reporting he took the story to the New Yorker and reimagined it for print) make this a very ‘on the edge of your seat’ reading experience.

Because we all know by now about Harvey Weinstein’s lifetime of atrocious behavior, he is very obviously in the category of ‘Evil People’, so what Farrow wrote about him in the book wasn’t shocking. What upset me the most was reading about how male executives at NBC, especially Noah Oppenheim, Andy Lack, and Phil Griffin, tried to kill the story. I knew the broad strokes of what they’d done, but reading the specifics was horrifying and upsetting. I expect so much more from people in the news business. At their best they are public servants of the highest order. And yet Oppenheim, Lack, and Griffin failed their viewers and staff in every way possible. Absolutely disgusting.

I appreciate that Farrow highlighted all the reporters over the years who tried so hard to break the story. He made it clear that even though he was the one to finally cross the finish line with the story, he owed much of his eventual success to them and his producer at NBC and the team at the New Yorker.

I also appreciate how Farrow tried to reckon with his part in his sister’s own story of sexual abuse. He doesn’t gloss over his own faults and mistakes. There are also quite a few funny and personal moments in the book that made it feel so multidimensional.

I put off reading Catch and Kill till now because I was worried it would be depressing. (That seems to be a theme for me in my reading!) Instead I was inspired by Farrow’s persistence in telling the story. And of course the bravery of the women who came forward to talk about their experiences with Weinstein is gut wrenching. It made me feel hopeful that even though change often takes much longer than we’d like, good and determined people who work hard can make a difference in the world for all of us.

She Said by Jodi Kantor and Megan Twohey

Jodi Kantor and Megan Twohey, the New York Times reporters who first broke the Harvey Weinstein story, wrote She Said. Just as Kantor and Twohey’s and Farrow’s initial stories were different and complimentary, so were their books.

But there were two ways in which Kantor and Twohey’s account stood apart. First of all, to state the obvious, they’re women. It was important to me to read the women’s version of this story given the subject matter. Their process and the ramifications they experienced was much different than Farrow’s.

And second, their story doesn’t end with the publication of the Weinstein exposé. They continue through the birth of the #MeToo movement. They describe how they felt about it as women and reporters, and cover Dr. Christine Blasey Ford’s story as well. The way they wrapped up the book with a group conversation between a number of their sources was really powerful.

I’d absolutely recommend that readers read She Said and Catch and Kill as companion pieces. Both excellent in their own right.

Know My Name by Chanel Miller

I had no idea what I was getting into when I picked up Know My Name. Everyone raves about it and says it’s the best book they’ve read in years. I just wasn’t sure what a whole book about Miller’s journey as a survivor would look like.

Most importantly, Miller is a gifted writer. Her writing is brutal but beautiful. Miller writes about the period in her life between when she was sexually assaulted on Stanford’s campus and the present day. She doesn’t sugarcoat a single moment of the process. It’s often painful to read, but also refreshing to see the female experience so perfectly captured in writing. Miller says all the things that any woman has ever thought but never said out loud. Like how unfair it is that we can’t walk alone without risk of being catcalled, or worse.

Definitely a must read for all women, but also for men looking to understand how they can be better allies.

In the mood for a certain kind of book? Did you know you can find all of my favorite books linked here?