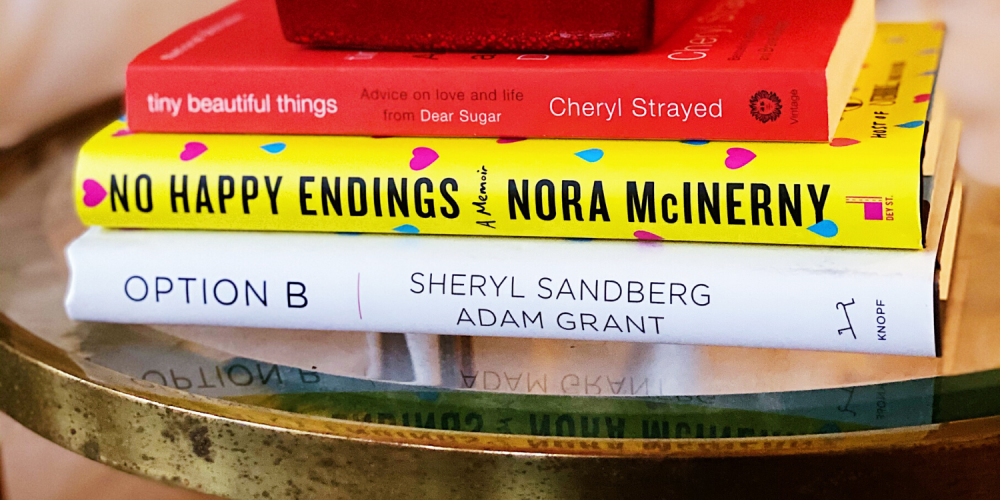 I’ll be the first to admit that I’ve gone nuts in planning out what I hope to read this year. There’s a spreadsheet, a calendar, a categorized bookshelf – it’s insane even by my Type A standards.

As I set about to plan my reading for this year, I set loose reading ‘themes’ for most months. I planned two themes for my January reads. One was resiliency, a topic that was really resonating with me going into the new year, and one was the 2020 presidential election.

For my focus on resiliency I chose to re-read one of my favorite books, Tiny Beautiful Things, as well as two other related books that I’d heard great things about. And I also wanted to read the memoirs of each of the four Democratic presidential frontrunners before the Iowa Caucus on February 3rd. I read three out of four and plan to finish the last one at the beginning of next month!

Lastly, I threw a couple of unplanned reads into the mix, including my book club’s January pick, Such a Fun Age.

The Wedding Date by Jasmine Guillory

I liked The Wedding Date much more than The Proposal, the first book of Guillory’s that I read. However, this series is still a little too steamy for my taste. (I prefer my romance novels to be slightly more like RomComs) While the plot and writing style was a little repetitive at times, the chemistry between the characters was real and it was a nice quick read.

Such a Fun Age by Kiley Reid

I dislike grey areas and messiness so Such a Fun Age really took me out of my comfort zone. At no point could you assume you really knew the characters. You’d start to think you knew them and their motivations and then you’d turn the page and everything would be shaken up. I’m not sure this book is worthy of all the praise it’s received, but it’s well written. Such a Fun Age gives readers a lot to think about so I think it’s well suited as a book club pick as long as you’re prepared to have some tough conversations about race and other topics.

No Happy Endings by Nora McInerny

I have followed writer Nora McInerny’s journey for many years. I love her Instagram, love her fierceness and strength and outlook on life, and yet I didn’t like No Happy Endings. It felt really disjointed, and just when we were heading somewhere deep and interesting a new chapter/essay started. Oh well! I’m still a fan of Nora!

I’ve read Tiny Beautiful Things once before and it’s one of my absolute favorite books. I’d recommend it to almost any person on the planet, especially folks who are grieving or focusing or personal growth.

Option B by Sheryl Sandberg and Adam Grant

I loved Lean In as well as Sandberg’s candid reflections on her husband’s death so I had high hopes for Option B. However, I found the balance between personal reflection and data to be off. I wanted to hear more about her experience, and fewer facts and numbers about the science behind resiliency. I’m not sure that I would recommend this to someone working through a grieving process.

I’ll be honest – I didn’t love either of Ali Wong’s comic specials. They both felt dirty and outrageous for the sake of being dirty and outrageous. So why did I pick up Dear Girls? To be honest, I’m not quite sure! But I’m so glad I did. This collection of essays, formatted as letters to her daughters, has a lot more heart than her standup. It’s pretty personal and at times very sweet, and I don’t feel like it’s quite as filthy. So as surprised as I am to be saying this, I loved this book!

Promise Me, Dad by Joe Biden

I’ve been putting off reading Promise Me, Dad ever since I received it as a Christmas gift in 2017. I worried that it wouldn’t be well written, which would be hard to stomach as a Biden super fan, and that it would be brutally sad.

Now, in the days leading up to the Iowa Caucus, I finally picked it up and I’m left speechless. It’s very narrow in it’s scope, covering a little more than a year in the Vice President’s life from November of 2014 through January of 2016. This time period encompasses the last months of his son Beau’s life, and the immediate aftermath of Beau’s death. What you’re not getting with this book is a sweeping overview of the Vice President’s life and views on policy. But in reading about how he juggled his obligations to his family and country at a crucial time, you’ll learn everything you need to know about Vice President Biden.

The book was as heartbreaking as I imagined. As the daughter of a two time cancer survivor it was almost too difficult at times to keep reading. I’d recommend this book not only as a top notch political memoir, but also as a meditation on family and grief. I wish everyone would read this book. It made me more excited than ever to cast my vote for Biden for President in 2020.

Our Revolution by Bernie Sanders

I’ll give it to you straight – I’ve been anti-Bernie ever since he announced his run for President in 2016. He wasn’t really on my radar before then. While I appreciate his goals, I disagree with his approach. But my real problem with Bernie from the very beginning was the behavior of his supporters. So I was open to the idea that I might not dislike Bernie so much if I divorced him from his supporters and I decided to read Our Revolution to learn more about him.

I found the book to be well written and easy to read. A little less than half of it is about his life, career in public service, and his 2016 Presidential campaign. The other half is his political manifesto and agenda. I found the second half to be tough to get through – poorly written, all over the place, and way too long. But I think if done well, I’d enjoy this format for other political candidate books in the future. While I didn’t end this book liking Bernie anymore than I did to begin with, I thought it was an interesting enough book, and not the worst political memoir I’ve picked up so far this year. I’m sure Bernie’s bros will enjoy this book.

After reading Shortest Way Home, it’s hard to understand how I was a big fan of Mayor Pete up until just a few months ago. I’d been impressed by him for years. I supported him during his run for DNC chair, closely followed the early days of his Presidential campaign, and found myself tearing up whenever he spoke publicly about his faith. But that admiration quickly faded, and it would have disappeared right away had I read this book any sooner.

This felt like an awfully long autobiography/memoir for someone who is only 38 years old. It was really overly written – Pete has never met a fifty cent word that he wouldn’t rather exchange for a ten dollar word. And parts of it read to me as deeply problematic – particularly a section where he describes how he can tell homeowners from parolees just by looking at them in an elevator. It’s not hard to understand why Pete is polling in the single digits and his support is coming mainly from upper class white people.

The most interesting section to me was Chapter 11 about best practices and lessons learned from data-driven government. I was also very touched reading about his coming out and his relationship with Chasten, his husband. (While we’re at it, I’m going to put out into the universe that I hope I get to read a book by Chasten soon. Despite how I’ve come to feel about Pete, I’m a huge Chasten fan!)

PS: I’ve been intermittently reviewing everything I’ve read since December of 2016. You can find all of my reviews here.