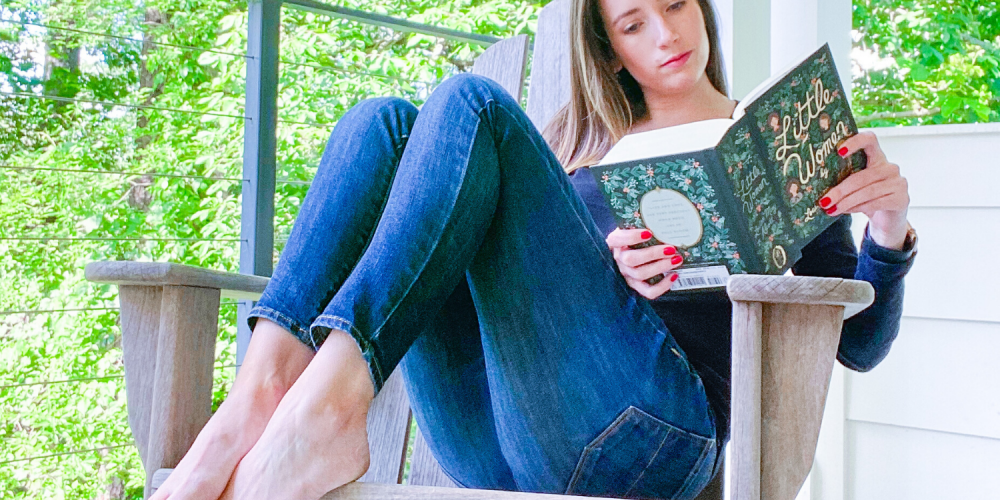 I read so much in May! Getting back in the swing of things with my reading made me so happy. The weather has been so nice that sitting outside and reading has felt like just the thing to do. And I’ve now watched almost every episode of Survivor in existence so I figured I might as well put down my iPad and pick back up some books.

Little Women by Louisa May Alcott

My plan was to read Little Women before I saw the movie remake in January. I read it in the third grade and liked it well enough back then so I thought it would be a fun thing to circle back to as an adult. While I never got around to reading it before watching the movie, I took a poll recently on Instagram as to what I should read next and the resounding answer was Little Women. Y’all – what were you thinking of recommending this book to me?!

I’m not going to recap the plot of the book because you all know what it’s about. Instead I’ll just tell you that I HATED it. One friend told me that as an adult she found it too ‘preachy’ and I think that description is spot on. It felt to me like listening to the world’s longest sermon. And gosh, it’s just so unnecessarily long. Alcott could have told the same story in half as many pages. The only character I liked was Laurie. Kind of funny considering he isn’t even one of the little women, huh?

Anyway, I certainly wouldn’t recommend that any adults read this and I’ll be sticking to the movie adaptations from here on out.

The Dilemma by B.A. Paris

First of all, I have to thank St. Martin’s Press for sharing this Advanced Readers Copy of The Dilemma with me! I always find B.A. Paris’s books to be totally gripping. They’re the kind of thing that I devour in one sitting, so I’ve been looking forward to this for a while.

The Dilemma follows Livia and her husband Adam on the day of her 40th birthday. Adam faces an awful dilemma and no matter what he does their family will never be the same.

I thought The Dilemma was going to be a thriller like Paris’s other books but it isn’t at all. Instead I’d describe it as a marital drama. I would have enjoyed this more if it was marketed that way. Instead I spent the entirety of the book waiting for the real excitement to start.

The Dilemma is a good marital drama, although I thought the question at the heart of the book was pretty cut and dry, not a serious dilemma at all.

Oona Out of Order by Margarita Montimore

Oona Out of Order is one of those books I saw all over bookstagram this spring. It’s about Oona, who lives her whole life out of order. Starting on her 19th birthday, she time travels to a different age every year. I liked the idea behind it but Oona turned out to be a character I didn’t care much about so I couldn’t get very invested in the plot.

All Adults Here by Emma Straub

I’ve read two of author Emma Straub’s previous books, Modern Lovers and The Vacationers, before. I gave both books two star reviews (not surprising given that I don’t usually like purely character driven books). So, I had low expectations for All Adults Here but read it anyway because, you guessed it, it was my book club’s pick for this month!

All Adults Here is told in shifting perspectives by members of the Strick family – Astrid and her grown children and grandchildren. It’s a story of Family and Generations and Secrets, and all that jazz. Not original subjects, but certainly the well never runs dry when it comes to those topics.

As silly as it sounds, I think I like All Adults Here more than Straub’s previous books partly because it’s set in a vacation town in the Berkshires. It feels more like a beach read à la Elin Hilderbrand and less like a Serious Character Study. And I found the characters in this book to be so much more likable than Straub’s characters usually are. It’s a bit of a slow burn at the beginning, and the last 50 pages feel a little too pat, especially the storyline with Cecelia and her friend, but all in all it’s very pleasant.

Nothing to See Here by Kevin Wilson

Nothing to See Here was sitting on my bookshelves unread for months. I was super intrigued by the premise but wasn’t a huge fan of Wilson’s previous book The Family Fang. So I didn’t make it a priority to read this one – that is, until Anne Bogel put it on her Summer Reading Guide, at which point I literally ran to pick it up.

Nothing to See Here is about a woman who has reached a dead end in her life and is hired to be the nanny for her former roommate’s stepchildren. The catch? The children have a habit of spontaneously combusting! I know, it sounds bizarre. And it is. But it was well written, fast moving, surprising, and sweet.

At times the plot was a little oversimplified, and there was at least one plot point that felt super extraneous. But this was still almost a five star book for me. I just wish it was a little bit longer!

Matchmaking for Beginners by Maddie Dawson

Y’all, I LOVED Matchmaking for Beginners. It’s definitely my favorite ‘new to me’ piece of fiction that I’ve read this year.

Marnie’s husband of two weeks has abandoned her, but not before she makes a life-changing connection with his magical great-aunt Blix. When Blix dies, she shocks Marnie by leaving her her home in Brooklyn. Marnie goes to Brooklyn to see the house, and adventure ensues.

Grace Atwood (the blogger behind The Stripe) and Becca Freeman, two of my favorite book lovers, recommended Matchmaking for Beginners on their Bad on Paper podcast. They said it was the perfect lockdown read, and they were right. It’s just magical and charming and has some great messages about taking chances and finding your people in life.

This Won’t End Well was another Bad on Paper lockdown recommendation and it’s also on Anne Bogel’s Summer Reading Guide! The book, written as a series of emails and diary entries, is about Annie, a woman whose fiancé suddenly takes an extended trip to France months before their wedding. Annie attempts to navigate the recent loss of her job and the disappearance of her fiancé while living with her mother. Meanwhile she gets involved with neighborhood drama and makes some new friends.

I didn’t really get into the book until I reached the halfway point but then it really grew on me. By the time I got to the last third I was totally hooked. I’d recommend This Won’t End Well for anyone who loved Eleanor Oliphant Is Completely Fine.

American Wife is one of my favorite books of all time. It’s a loosely fictionalized version of the life of former First Lady Laura Bush. I hadn’t read it in quite a while and, for the most part, it was just as good as I remembered.

However, reading it again after spending the last six years working in politics, I really took issue with the idea that Alice (aka Laura Bush) can separate her personal values from her love for her husband Charlie (aka George W. Bush), a person whose policies as an elected official are the antithesis of her own values. Until I came to the last page and … wow. I had forgotten the bombshell that Sittenfeld throws in at the very end. It kind of made me rethink my previous complaints.

But aside from that, I just adored the way Sittenfeld examines a relationship and marriage over the course of so many years, the ways people grow and change … or don’t. This would be a great backlist pick for anyone who hasn’t read it yet. It left me so excited to pick up Rodham next month!

When I was in college, the Hunger Games trilogy is what really got me into reading for fun for the first time in many years. Suzanne Collins’s writing was a reminder to me that books could be both thought-provoking and fun at the same time. I was thrilled when I heard she was writing a prequel to the trilogy. We only had to wait ten years!

The Ballad of Songbirds and Snakes is told from the point of view of Coriolanus Snow. As a reminder, Snow is President of Panem by the time Katniss participates in the 74th annual Hunger Games. The book revolves around the 10th annual games while a young Snow serves as mentor to one of the tributes.

I’ve always been a little put off by the idea of Snow as the subject of the prequel. In fact, I think he’s the last person in Panem whose point of view I would have chosen to read about. The first two-thirds of the book are OK but don’t really have the same flavor that the original trilogy did. But to me the last third of the book was just AWFUL and I don’t think I’m alone there.

Anyway, reading this really just made me miss The Hunger Games so I went back and re-read those! And the good news is that they are still just as good as I remember them being ten years ago.

I intended to read Underground in March to commemorate the 25th anniversary of the Tokyo sarin gas attacks. But March didn’t feel like the time to read about a terrorist attack, you know?

If you’re not familiar with what happened, members of a religious cult named Aum perpetrated the worst terrorist attack in Japan’s history by releasing sarin gas on a number of Tokyo subway trains. The attack killed 12 people and injured 1000+ more. My family and I were living in Tokyo when this happened and the train my dad usually took to the office was one of the ones hit. By some strange miracle of God, he was running late to work that day and arrived at the station just after the attack happened.

So now you understand why I felt the need to read this book. Underground consists of interviews with both survivors of the attack and cult members. The book is a must-read for anyone fascinated by Aum or Japan but would probably be hard to get through if you don’t know much about the incident or Japan itself. Murakami makes no effort to provide a primer on these things for the uninitiated.

This was at times a painful read but it was the clearest glimpse into the psyche of the Japanese people that I’ve ever read. It’s also the kind of book that just left me with so much to verbally process. I really apologize to the friends and family members that were subjected to my barrage of thoughts on this book!

Whew! That was a lot. Next month I’m really looking forward to reading The Vanishing Half. I’ve heard rave reviews about it, and I think it’s so important to read books by authors of color right now. And I’m really crossing my fingers that Atlanta libraries will re-open for curbside book pickup! I’ve had plenty of books to read over the last few months but I really do miss visiting the library.